Greek music is indispensably connected with the Greeks; Greek songs can be heard everywhere you go: in stores, restaurants, bars, public places, even coming from houses in high volume.

Greeks love creating, playing, dancing and listening to music of all kinds, but Greek music is their absolute favourite, as it expresses their passions and desires as nothing else in this world.

The people of Greece play music when they want to celebrate, mourn, have fun, dance, break up, or as a hobby. Greek music is diverse and rich, flamboyant and passionate in all its kinds and genres.

Greek music is as old as Greece; it goes back to the ancient years, as Greeks associated songs and music with several Gods and Deities. Even the word music derives from the Nine Muses, who were the sources of inspiration for creation to artists since the antiquity. 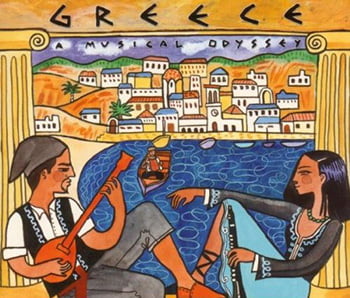 During its long history, Greek music changed a lot, and expanded to several different paths and types: ancient Greek Music was already significantly different during the Byzantine Era and later during the Renaissance and the late 19th century.

Rebetika, laika, kantades ( the songs from the Ionian Islands), mantinades (the rhythmic poem –songs from Crete), political songs, songs from Minor Asia and modern songs with more urban sound, quite different than songs in the 50s or 60s, in many rhythms and dances…

Bouzouki is the most recognized music instrument, as almost all foreigners can recognize this oddly sounding but very charming instrument, the cornerstone of Greek  music the last centuries.

Greek singers and composers exist in abundance; it is said that every Greek creates lyrics or music, and that most of them keep a little diary with poems and lyrics in some of his drawers.

Some of the Greek composers are internationally known, due their compositions for movies, theatrical plays or known foreign artists: Mikis Theodorakis, Manos Hadjidakis, Iannis Ksenakis, Stavros Ksarhakos and many more, have offered their music genius to Greece and the world, creating some amazing pieces of music.

In this site, we wish to explore Greek music and Greek songs and present the genres, the composers, the poets and the singers that make Greek music so distinctive and so much loved and recognized everywhere in the world.

Follow us in a melodious trip around the music of Greece…

1 thought on “Greek music, an introduction”