No one doubts that Vangelis is the most known and successful Greek composer abroad; Vangelis Papathanasiou is the man who made Greek music known worldwide, adding his personal touch to what we knew our music to be up to that point.

Vangelis composes and performs mainly instrumental music and film scores. During his huge career he has flirted with many genres and has proved to be very hard to categorize. The music of Vangelis has been filed as “synthesizer music”, “new age”, “progressive rock”, “Symphonic rock”, “Space music”, “electronic music”, and more. None of those terms is spot on and his output is too varied to catch in one word.

Vangelis was born as “Evangelos Odysseas Papathanassiou” on March 29th 1943 in a small town near Volos, Greece. He started playing the piano at the age of 4 and gave his first public performance of his own compositions at the age of 6. According to his own memories Vangelis has always been fascinated by sound and music, ever since his earliest childhood.

The beginning of a career  – Vangelis in the 60s

Halfway through the sixties Vangelis first publicly appears performing with his school band The Forminx, who soon become a huge national success in Greece with their Beatles-like appearance and songs. Already Vangelis showcases his talent for composing catchy songs and playing the keys of his Hammond organ.

After a few short collaborations with other Greek performers like Maria, Zoitsa ‘Zoe’ Kouroukli and Aleka Kanellidou, Vangelis forms his own band under the name “The Papathanassiou Set”, together with ‘Silver’ Koulouris, Demis Roussos and Lucas Sideras. It is under this name that they record singles with George Romanos, Ricardo Credi and Vilma Lado.

In 1968 Vangelis, Demis and Lucas decide to try their luck in the British music scene, but on their way to London they get stuck in Paris, where strikes have paralyzed the air traffic. Under the name of Aphrodite’s Child they record their first single “Rain and tears”, which immediately becomes a huge hit.

The single is quickly followed by their first album “End of the world”, and only one year later the band releases another album, titled “It’s five o’clock”. It was only at the end of this decade that Vangelis stood at the start of his career. Refusing to tour with the band, he rather stays in the studio working on new material for the band. It is during this period that for the first time he composes a musical score, for a movie titled “Sex Power” by director Henry Chapier.

Vangelis in the 70s: Film Music

Even before the release of their last album “666”, Aphrodite’s Child splits up. Now Vangelis is finally free to start working on his solo career, and he does so with the release of his first solo album “Fais que ton rêve soit plus long que la nuit”, an album based on the student riots in Paris during 1968.

It is during this period, in the first part of the seventies, that Vangelis experiments with sounds created with synthesizers, a relative new instrument at the time. In 1973 again he composes the score for another Henry Chapier movie, this one titled “Amore”, as well as releases a progressive rock album titled “Earth”.

In between he also finds the time to record a few songs with Greek singer Melina Mercouri. In 1974, after arranging an album for Italian singer Claudio Baglioni, Vangelis decides to move to London and build his very own studio.

Even before “Nemo”, his very first self-owned studio finishes, in 1975 Vangelis produces albums for Greek rock-band Socrates and Greek singer Mariangela at Orange Studio in London. And as Nemo continues to be built in an old school building at Hampden Guerney Street, already Vangelis records his first album “Heaven and Hell” there…

The newly built studio attracts a lot of other artists as well during the next few years, and Vangelis works with Italian singers and bands like Chrisma, Patty Pravo, Riccardo Cocciante, Panda and I Nuovi Angeli to name a few.

Another long lasting relationship with Aphrodite’s Child lead singer Demis Roussos continues with the cooperation on albums like “Magic” in 1977, “Demis” in 1982 and “Reflection” in 1984. In 1979, at the end of another decade Vangelis signs a new contract with record label Polydor, which would serve him well into the eighties.

The first album to be released for Polydor is “China”, a typical album where Vangelis not only shows his ability to play electronic instruments, but also masterfully plays all kinds of percussion instruments.

The 80s and 90s are the most successful decades for Vangelis earning the love of audience and critics.

In 1981, Vangelis Papathanasiou composed the score for the Oscar-winning film Chariots of Fire. The soundtrack’s single, “Titles”, won Vangelis the Academy Award for Best Original Music Score and also reached the top of the American Billboard.

In 1992, Paramount Pictures released the film 1492: Conquest of Paradise, also directed by Ridley Scott, as a 500th anniversary commemoration of Christopher Columbus’ voyage to the New World. Vangelis’s score was nominated as “Best Original Score – Motion Picture” at the 1993 Golden Globe awards, but was not nominated for an Academy Award.

Later, Vangelis composed music for many more films, such as Alexander, El Greco, while he also scored a number of undersea documentaries for French ecologist and filmmaker, Jacques-Yves Cousteau.

In 2000, Vangelis appeared in Athens, performing live Mythodea, a predominantly orchestral rather than electronic piece that was originally written in 1993, and used by NASA as the theme for the Mars Odyssey mission in 2001. A year later, in 2002, Vangelis created the 2002 FIFA World Cup Official Anthem for the 2002 World Cup. 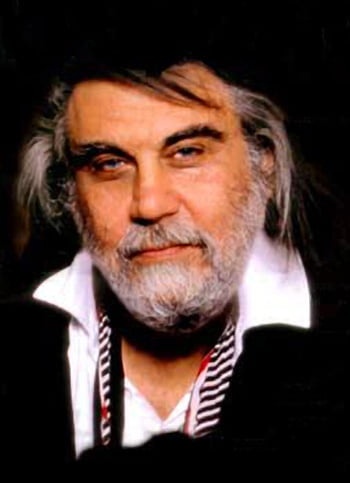 Little is known for Vangelis’ personal life. It is known that he doesn’t like giving interviews, and that he rarely appears in media.

It is also known that Vangelis had a wife named Veronique Skawinska who was a photographer.

Vangelis was married also with a singer named Vana Verouti,who had performed vocals on some of his records, performing for the first time with him on La Fête sauvage and later on Heaven and Hell.

The immense contribution of Vangelis Papathanasiou not only to Greek music but to World Music resulted in numerous honors: