Sakis Rouvas got emotional with his newborn son! The fourth member of Rouvas’ family came to this world a few days ago, since Katia Zigouli, the wife of Sakis Rouvas gave birth to their son with a Ceasarian section.

Sakis Rouvas was present during the labor, something that he also did during the birth of their first child. 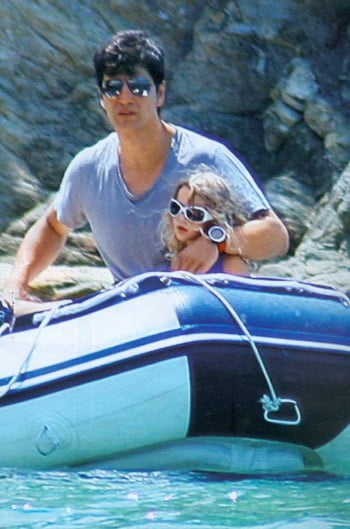 ccording to the martyrs of the event, Sakis got really emotional when his son was born, and could not hold his tears of happiness. He got so excited that he started kissing and hugging the doctors and nurses, and pretty much everyone who was present in this happy moment.

Katia felt the first labor pains the previous afternoon, so she went to the hospital, since Rouvas junior was in a hurry, and came to the world a week earlier than expected.

According to the ones who saw the baby, it seems that he looks exactly like his dad, so we can only expect him to be gorgeous!

Sakis wrote at his Twitter page the phrase “I have a son” expressing his happiness about the second baby.

We now wait to find out what the name of the little boy will be, see his first pictures and see if he is really a lookalike of his handsome father.

For now, you can see a picture from the family vacations on the island of Corfu, with Sakis Rouvas, Katia Zigouli and their little daughter, Anastasia.